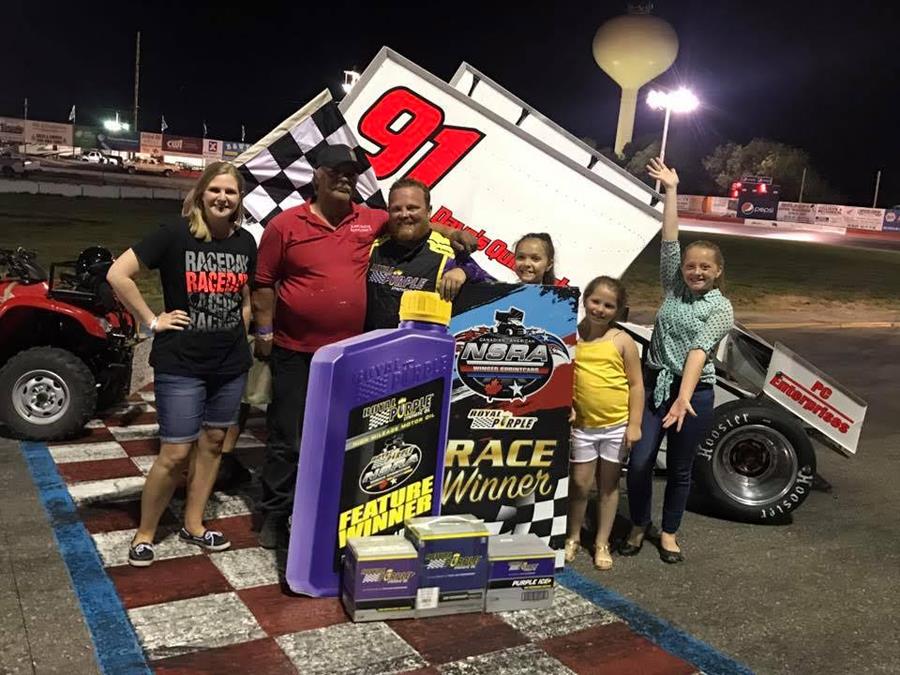 By Ben DeatherageThe Royal Purple NSRA Winged Sprintcars would participate in night two of the Bob FM Diamond Cup, presented by Star Diamonds, on Saturday, June 3rd, at Meridian Speedway. Another packed house was on hand to catch some exciting short track racing. Twenty-three cars would be on hand representing the states of Idaho, Oregon, Washington, Utah, and California as well as the Canadian province of British Columbia.

Meridian’s Trevor Miran would be the leader of the first lap in the feature. Driving for car owners Ron & Gord Rendle, Miran would get passed on lap six shortly after a restart. The driver to take over the point was Chowchilla, California native Eric Humphries, in the Carl Mott and Dennis Bolding owned machine.

Humphries set a wicked pace once a good green flag run developed. However, some fast competition began to give chase to Eric especially as heavy lapped traffic approached. On lap twenty-three Bryan Warf, driving for car owner Pat Russell, would nab Humphries at the line to officially lead the lap.

From there Warf would set sail the rest of the way to create an extremely large interval over second place. A lap thirty-six caution would bunch the entire field up setting up a fourteen-lap shootout to the end. On the ensuing start Bryan would pull away from the field and cross the finish line in first.

It would mark the first time in 2017 that Bryan Warf would win against the Royal Purple NSRA Winged Sprintcars. Also, once all the points were tallied Warf would be declared the overall champion of the Diamond Cup. It would be his second career Diamond Cup and his first since 2013.

Fast time of the night would be Kyle Alberding while Bryan Warf got the job done in the trophy dash. Heat race winners were Taylorsville, Utah youngster Kyle Bergener, Eric Humphries, and Trevor Miran.

The Royal Purple NSRA Winged Sprintcars return to racing on Saturday, July 29th at Monroe, Washington’s Evergreen Speedway for the Rory Price Memorial. It will the one and only visit to the Evergreen State and is expected to draw an incredible car count from all over the Pacific Northwest.

Royal Purple is the proud title sponsor of the NSRA Pavement Sprint Car Series. Royal Purple manufactures high performance lubricants for most automotive, industrial, marine, motorcycle and racing applications. It is considered the best synthetic motor oil by many end users. For more information or to find a store that carries these wonderful products log on to www.royalpurpleconsumer.com or @royal_purple.