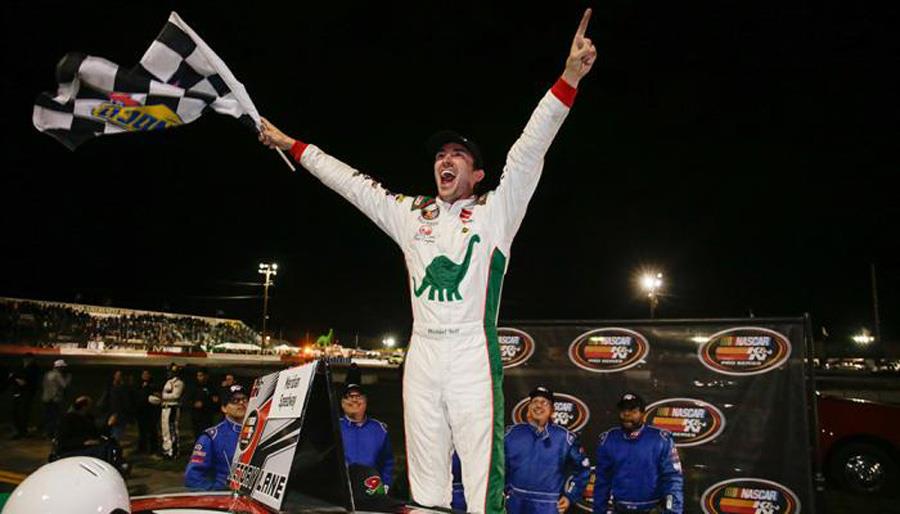 By Davey Segal, NASCARHomeTracks.com (Meridian, ID) -- Fireworks lit up the night sky after the checkered flag flew on the NAPA Auto Parts Idaho 208 presented by Perfect Hydration and Lights Out at Meridian Speedway. And Michael Self wound up being the one to bask in the glory.

The Park City, Utah native wheeled his No. 9 Sunrise Ford/Sinclair Lubricants Ford to the winner's circle at the quarter-mile to earn his first victory of the 2017 season and seventh NASCAR K&N Pro Series West win of his career.

It didn't come without controversy.

On an overtime restart, Derek Kraus lost the lead to Bill McAnally Racing teammate Chris Eggleston, who went on to cross the finish line in first place and was initially declared the winner. However, the finish came under review from NASCAR.

It wad determined that Eggleston jumped the final restart, meaning his first-place finish would not hold. That handed the race win to Self.

"I was pretty happy with second," Self said while reflecting on waiting for official word from NASCAR. "That was going to be our best finish of the year so far. That last restart in fifth, I actually didn't think we had a shot at it. But that's how things go on these quarter-mile short-tracks. So all in all, really happy and pleased with how it ended."

The result for Self was his fifth top five and 11th top 10 of the 2017 season. But in the grand scheme of his career, this one topped them all.

"It means everything," Self said in Victory Lane with a smile. "It may seem silly, because people are just gonna say 'it's a K&N West win,' but to do it here, with Sinclair Oil on the car, and in Bob Bruncati's car. He gave me a chance this year to get back in this car, after I've been out of a car for three to four years. And it's been three years of searching for sponsors and just working my butt off every day, this is the biggest win of my career."

"This thing was super, super good to fire off this race," said Gilliland, who led a race-high 125 laps. "The first 50 laps we were amazing. This thing was just effortless to drive. After that, it just started bouncing on entry and got super tight. But we got two more races on the West coast that are very important. I have no doubt that everyone on my NAPA Racing team will work through it together. That's what we've done all year, we've got a very dedicated group of guys."

Although Self is all but mathematically eliminated from championship contention, he thinks this win will give him and his team a much-needed shot in the arm heading to California to close out the 2017 K&N West season.

"I think this is a good boost, this is good momentum," Self said of the final two races left on the season. "We knew we weren't going to win a championship )at the start of the year), that was going to be out of reach. But to come and win a race and to try and keep finishing in the top five, that's out goal. And that's what i'll keep trying to do and that's what I'm looking forward to."

Kraus is third in championship points, one ahead of Rodgers, but 79 back of Gilliland. Self is fifth in points.

Boise native Trevor Cristiani led 15 laps but was relegated to a 19th-place finish after crashing on lap 100 into the turn three wall.

The NASCAR K&N Pro Series West will return to action at All American Speedway in Roseville, California on October 14.

• There was one red flag for 17:34 minutes.
• Car #99 was penalized for jumping the restart, finish adjusted to last car on the lead lap.