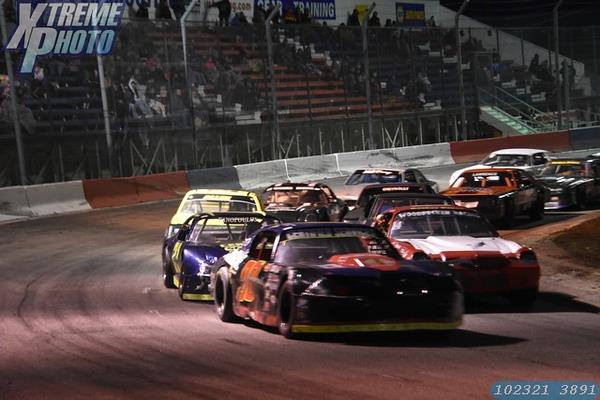 Nineteen Pauly’s Bar Room Street Stocks rumbled to green for the first of their three 33-lap features. Scott Cooper got to the gas pedal first and dashed to the early lead, but was quickly overcome by Kendra Occhipinti, Ted Lingren, and Pat Tully.

On the move in the opening laps was Casey Tillman, who muscled his way through the pack to fourth in just ten laps. Not content with a top five, Tillman continued his charge, and with fifteen laps to go squeezed his machine into the outside lane and roared around Tully.

Tillman erased Occhipinti’s lead in just a handful of laps, but could not find enough clean race track to mount a challenge for the top spot. With six circuits left to run the strain on Tillman’s racer proved too much, and he slowed to a stop just short of the pit area to bring out the first caution flag of the race.

On the restart Occhipinti worked the inside line in her Marv’s Tire Service racer while Tully took to the outside in his bid for the victory. The pair raced side-by-side from the restart all the way to the checkers, with Tully claiming victory by half a car length over a sliding Occhipinti.

A full field of fourteen Zamp Race Products Stingers took the green flag for their final 25-lap feature of the year. Makayla Trafford, Shawn Tully, and Payton Weller showed the way early in the going, but point leader Niko Heinzel and his Idaho Laser and Design racer proved too strong and the youngster from Nampa, Idaho capped a championship season with a feature win.

The Project Filter Pro-4s closed out their 2021 campaign with a 35-lap feature. Grip was hard to come by on the cold, damp track, but that didn’t deter Jordan Harris from parking his H&H Auto, Allan Marsh Travel Center machine in the Caleb’s Chop Shop Winner’s Circle. With a third-place finish, Ryan Bailey claimed the division’s season championship.

The second leg of the Pauly’s Bar Room triple 33s went green with Joe Thuss and Joshua Cuff on the front row. Thuss sprang to the top of the Pepsi-Cola scoreboard to lead the first four laps before Scott Groom moved his machine to the lead.

Behind Groom, the pack battled hard for each and every position. With two laps left championship challenger Troy Evans broke free of the pack, erased Groom’s lead, and flew around the outside line to take the night’s second feature victory in his Matt Compton Race Engines, A&E Sharpening entry.

Nineteen Boise Bath and Kitchen Company Mini Stocks crowded the quarter-mile for a 35-lap season-ending feature. Despite the close quarters, the race ran without incident and Jason Sanders piloted his Valley Property Management, Excel Concrete racer to a dominant win.

Behind Sanders, Travis Pavlacky cruised to a fourth-place finish and claimed the 2021 Boise Bath and Kitchen Company Mini Stock championship.

Sixteen Coors Pro-Late Models took the final green flag of the season with Monica Heath and Lynn Sharp on the front row. Heath got to the gas pedal first and led the way for fifteen laps until Pat Tully moved his Pinnacle Appraisal, Certified Services machine into the top spot.

But Tully wasn’t safe out front as he was swept up in a crash that saw Brandt Wilson’s car ignite after heavy wall contact. The damage was extensive, but Tully’s crew patched his car together enough to restart the race.

The green flag waved and Tully came under attack from Kasey Kleyn and his Thaemert Farms, Four Season Farm Supply machine. As the laps wound down the top two sliced their way through traffic. With the white flag in the air Tully tried to pin Kleyn behind lapped traffic, but Kleyn cut low off of turn four and nearly beat Tully to the Caleb’s Chop Shop Victory Stripe.

Though she was forced to retire early in Saturday’s feature with a broken panhard bar, Daytona Wurtz was crowned the 2021 Coors Por-Late Model champion.

“It’s not exactly how we wanted to end the season,” Wurtz joked about her mechanical trouble. “But you get what you get I guess.”

A whole hive of Big Daddy’s Barbecue Hornets took the green flag for the final race of their 2021 championship chase. Jeff Matuska took home both the feature flag and the season championship in his Neil Alan Fine Jewelry racer.

“This is every kid’s dream,” Matuska said. “I know it’s just a Hornet but this is the coolest thing in the world.”

The final feature of the 2021 season belonged to the Pauly’s Bar Room Street Stocks and their third 33-lap contest. Pat Tully, at the controls of his Bruce and Rod’s Point S, Certified Services machine, held off a hard-charging Josh Fanopoulos and his Certified Services, CP Express entry to score his third victory of the night.

With the 2021 season in the books, focus shifts to the 2022 schedule release party at the Boise Roadster Show, on March 11-13. Stay up to speed with all the latest news and notes from around the quarter-mile at www.meridianspeedway.com and our Facebook and Instagram pages. On behalf of each and every member of the Meridian Speedway staff, we thank you for a great season of racing under the big yellow water tower, and we’ll see you in 2022 at your NASCAR Home Track, Meridian Speedway.