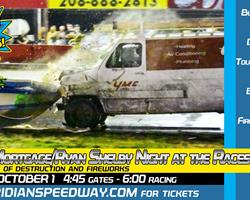 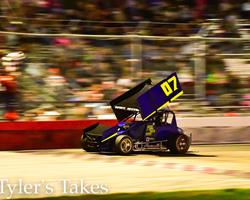 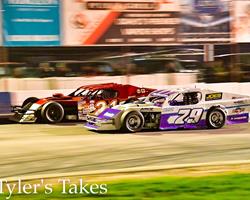 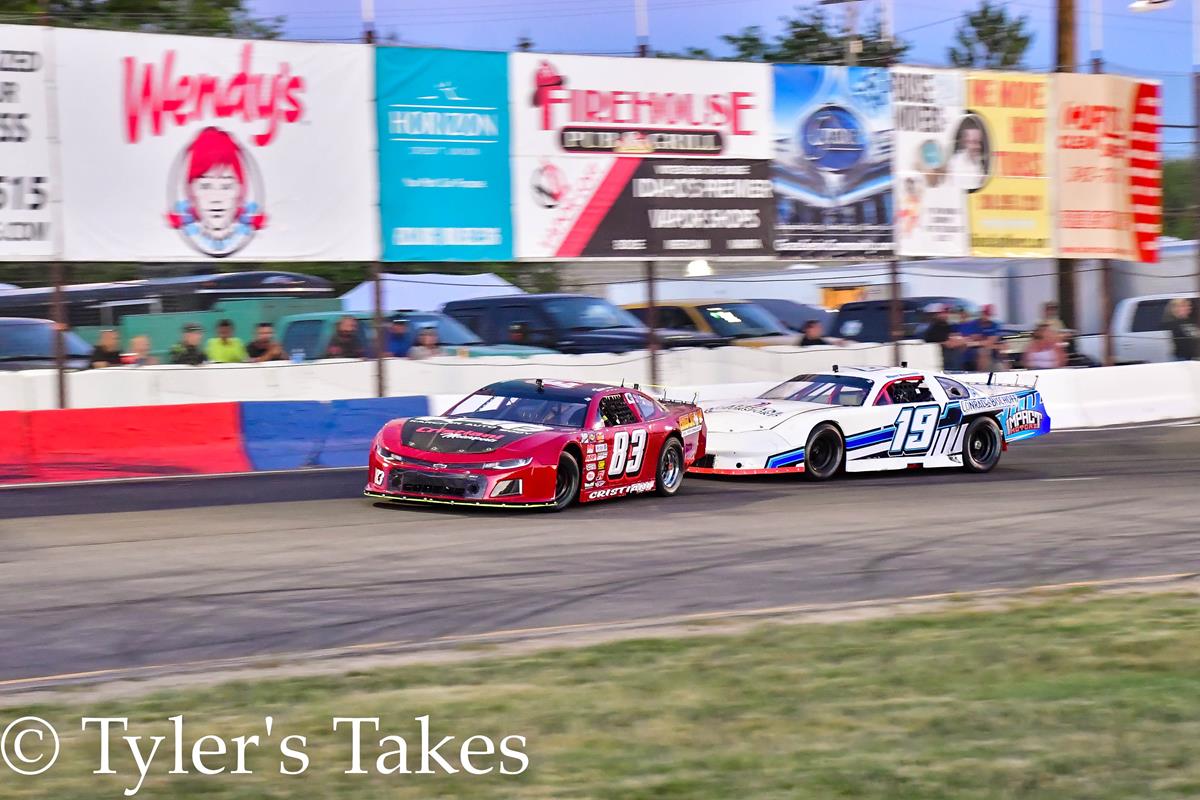 A dozen Zamp Pro-Late Models took the green flag for the 2022 Bill Crow 50. Neil Wassmuth got to the gas pedal first and rocketed to the early lead wile outside pole sitter Monica Heath struggled to make speed in the outside groove. This let Brandt Wilson close, and as he and Heath charged into turn three contact was made and they spun in front of the pack.

When the smoke cleared Wilson’s American Staffing, Brandt’s Automotive machine sat atop Heath’s car. Ray Clever sat at the exit of turn four with terminal right front suspension damage, and Jayson Wardle sat piled into the turn three concrete. All drivers walked away from their vehicles unscathed, with Heath’s crew affecting repairs to get her back in the race.

With the track cleared the race restarted with Wassmuth and Cody McCue on the front row. Wassmuth again roared to the lead, but soon came under fire from Melissa Weaver, who moved her Marv’s Tire Service machine to the front on lap two.

Behind Weaver, quick qualifiers Kyle Latham and Dalton Cristiani knifed their way through the pack. After six circuits the pair sat second and third on the Pepsi-Cola scoreboard. An early caution flag lined Latham’s Impact Motorz, FlapJack Flips entry up even with Weaver for the restart, and the Nampa, Idaho racer soon took over first place.

Cristiani followed Latham past Weaver and quickly erased the gap between himself and the leader. Another caution flag, this one for a spin and seemingly unrelated fire on McCue’s Impact Motorz, Superior Towing car, lined the lead duo up side-by-side for the restart.

On the restart Latham slung his car around the outside in a desperate attempt to stay in the lead. But Cristiani was too strong, and the youngster slid his Gibson Diesel Performance, Karcher Auto Body racer in front of Latham at the race’s halfway point.

Latham’s car faded over the race’s final half, which allowed Weaver and Terrell Daffron to pass for second and third. But it all happened behind Cristiani, who cruised to the Bill Crow 50 victory.

Fifteen Boise Bath and Kitchen Company Mini Stocks beat and banged their way through a 25-lap feature. A series of early wrecks left half of the field with damage of one sort or another.

All this time Everett Meeks and Keith Ostic battled hard for the lead. Ostic found his machine handled better up high, and soon the Boise, Idaho driver held the top spot.

Ostic’s turn at the point was short-lived as Gary Luck hooked the inside line and moved his car to the top of the Pepsi-Cola Scoreboard. Behind Luck, Troy Palmer and Travis Pavlacky raced wheel-to-wheel for the runner up spot. But Pavlacky’s FVC Construction, Barracuda Mechanical pickup would lose power with just three laps left and set up a late-race restart.

The green flag waved and Luck blasted to the lead while Palmer wheeled his machine hard to stay ahead of Morgan Trammel. Trammel worked his Trammel Construction, Bobby’s Transmission Center car under Palmer and edged the Boise, Idaho racer to the line for second behind Luck.

The Project Filter Pro-4s raced side-by-side for all 25 laps of their Friday night feature. Ryan Bailey and Kenny Chandler were the first pair to duel for the lead while Andrew Prince and Jordan Harris fought hard for third place.

Harris won that battle, but was soon sent to the back of the pack after contact in turn four sent Chandler and his Project Filter, Fairly Reliable Bob’s machine spinning through the grass. On the restart Harris flew to third in his H&H Auto, Challenger Auto and Transport racer, then dove low on Prince for second place with seven circuits left. Next in Harris’ sights was Bailey, who he dispatched to take the lead and eventually the Trammel Construction Feature Flag.

Meridian Speedway celebrates Independence Day on Monday, July 4, with the Stinker-Sinclair Firecracker 50 and Meridian Fireworks Spectacular. The Speed Tour Sprint Cars and Big 5 Super Late Models powered by Pit Stop USA share headliner duties alongside the Touchdown Automotive Street Stocks, Boise Bath and Kitchen Company Mini Stocks, and the Firehouse Pub and Grill Bombers and Big Daddy’s Barbecue Hornets in the Midnight Ride of Paul Revere. Plus, after the final checkered flag drops the City of Meridian Fireworks display lights up the sky. General admission for Monday’s full night of on and off-track fireworks is just $20 for adults, $18 for seniors and military members, $8 for kids 7-11, and free for kids 6 and under. Gates swing open at 4:45 p.m. Friday, with qualifying at 6 p.m. and racing at 6:30 p.m. Purchase your advance tickets now at www.meridianspeedway.com and text ‘meridianspeed’ to 84483 to receive exclusive updates from around the quarter-mile. We’ll see you Monday, July 4, for the Stinker-Sinclair Firecracker 50 and Fireworks Spectacular under the big yellow water tower at your NASCAR Home Track, Meridian Speedway.